Eurasian Patents in light of the Eurasian Economic Union

Protection of an invention in Russia can be obtained through either a Russian or Eurasian patent. The fact that a Eurasian patent covers, apart from Russia, other countries, namely: Turkmenistan, Belarus, Tajikistan, Kazakhstan, Azerbaijan, Kyrgyzstan and Armenia – is certainly an advantage over a Russian patent.  But that additional geographical coverage comes at a price. Eurasian official fees are generally significantly higher. For some examples of this, see the table below:

In addition, the average quality of examination, in the author’s opinion, is better in Russia.

Clearly, it is the Russian market that interests foreign applicants the most. Thus, the key question they ask is whether it is worth seeking a Eurasian patent when a Russian one appears preferable in terms of costs and time. When weighing this up, applicants need to consider the rapidly developing economies of the Eurasian economic union (EAEU).

The EAEU is an international organization for regional economic integration. The Member-states are currently Russia, Belarus, Armenia, Kazakhstan and Kyrgyzstan (all of which are covered by a Eurasian patent).

The EAEU provides for free movement of goods, services, capital and labor, and pursues coordinated and harmonized policy in the Member-States. It was created in 2014 on the basis of the former Eurasian Economic Community (EAEC) which was itself established in 2000. Despite its youth and owing to its well-developed institutional structure rooted in the old Soviet Union, the EAEU is much more integrated than MERCOSUR (over 30 years old) and ASEAN (over 50 years old). In terms of integration, the EAEU is behind only the European Union.

The EAEU has paid much attention to Intellectual property including patents. Recently a Memorandum of Understanding between the EAEU and WIPO was signed, the purpose of which is to strengthen the organizations’ interaction in the sphere of protection and enforcement of intellectual property rights. Preparations are also currently under way for the signing of a Memorandum of Understanding with the Eurasian Patent Organization.

Interestingly, a special Working Group has been created on the development of proposals for further implementation of the principle of exhaustion of exclusive rights to intellectual property. The idea so far is to permit “parallel imports” for certain types of goods.

The EAEU has also proved to be particularly important in the pharmaceutical field. Thus, first drug registration applications have recently been filed in accordance with the unified EAEU rules. This can be seen as a breakthrough since previously drugs were registered in accordance with national rules, and pharmaceutical producers planning to sell theirs drugs on the territory of the EAEU member-states had to file several dossiers on the same drug, pay for the expertise in each country and spend a lot of time on register procedures.

The gross domestic product of the EAEU member-states

(in percentage as against the previous year) 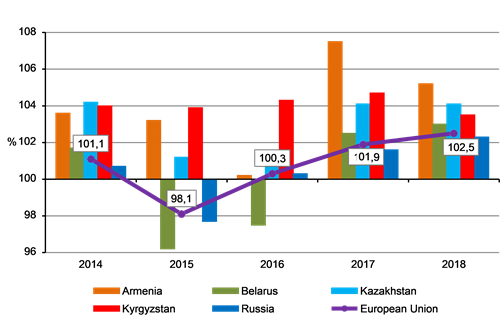 The gross domestic product per capita of the EAEU member-states

(in thousand US dollars) 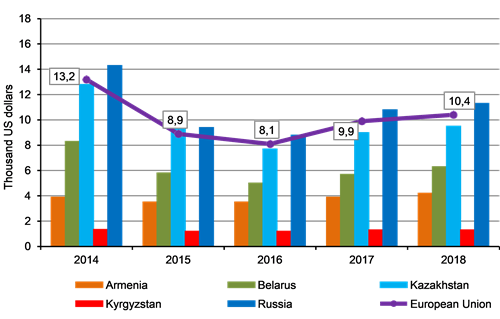 These two graphs illustrate that whilst the region suffered from 2014-2016 at least since 2017 economy of the EAEU has been growing. Not just Russia, but the whole region has seen improved economies. Perhaps, therefore, it is no surprise that the number of patent applications filed with the Eurasian patent office in 2018 was almost 6% higher than in 2017.

It is clear from all of this that the EAEU as a whole – and not just Russia – is worthy of consideration when setting patent filing strategy. To be able to cover all the countries of the EAEU (and more) with a Eurasian patent is looking like an increasingly attractive option as the economic outlook improves and the economies increasingly look to innovation to progress. Seeking patent protection in Eurasian countries other than Russia is becoming more important than before when Russia was essentially regarded as the only country of interest in the Eurasian region. Due to the creation of the EAEU, the Eurasian market will become more globalized and the circulation of goods much freer. In this regard, the start of registration of drugs in accordance with the unified rules is a case in point. Patentees who are slow to realise this could find themselves lagging behind competitors.